> Conserve and sustainably use the oceans, seas and marine resources for sustainable development. 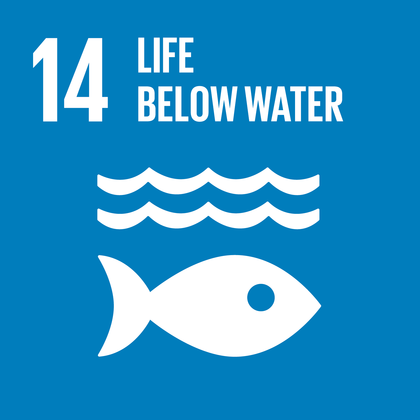 Oceans cover 71 percent of the Earth's surface. They are essential for making the planet livable. Rainwater, drinking water and climate are all regulated by ocean temperatures and ocean current. Over 3 billion people depend on marine life for their livelihood. Oceans absorb 30 percent of all carbon dioxide produced by humans - wikipedia

The oceans contain more than 200,000 identified species, and there might be thousands of species that are yet to be discovered. Oceans are the world's largest sources of protein. However, there has been a 26 percent increase in Ocean acidification since the industrial revolution. A full 30 percent of marine habitats have been destroyed, and 30 percent of the world's fish stocks are overfishing. Microplastics are another form of marine pollution.

Individuals can help the oceans by reducing their energy consumption and their use of plastics. Nations can also take action. In Norway, for instance, citizens, working through a web page called finn.no, can earn money for picking up plastic on the beach. Several countries, including Kenya, have Phase-out of lightweight plastic bags for retail purchases.

Improving the oceans contributes to poverty reduction, as it gives low-income families a source of income and healthy food. Keeping beaches and ocean water clean in less developed countries can attract tourism, as stated in Goal 8, and reduce poverty by providing more employment.

The targets include preventing and reducing marine pollution and acidification, protecting marine and coastal ecosystems, and fishing regulation. The targets also call for an increase in scientific knowledge of the oceans.